Bitcoin traded lower on Monday after buyers failed to sustain a weekend rally toward $60,000. The cryptocurrency was trading at around $56,000 at press time and is down about 5% over the past 24 hours.

For now, some analysts view the current pullback in cryptocurrencies as a normal occurrence after a strong rally over the past month.

“With bitcoin and other crypto assets having reached fresh all-time highs, there was always likely to be a measure of profit-taking from investors, which then translates into price weakness,” Simon Peters, an analyst at eToro, wrote in an email to CoinDesk.

As bitcoin buyers take some profits, equities appear to be holding up. The S&P 500 is up about 4% over the past month, compared with a 7% decline in BTC over the same period.

The chart below shows the recent decline in the 60-day correlation between bitcoin and the S&P 500. The short-term disconnect between the cryptocurrency and the stock index suggests that investors still have an appetite for risk even as some have reduced exposure to crypto.

The recent futures-based bitcoin exchange-traded fund launches in the U.S. accounted for 90% of inflows into bitcoin products last week, according to a report by CoinShares.

Most digital assets in the CoinDesk 20 ended the day lower. 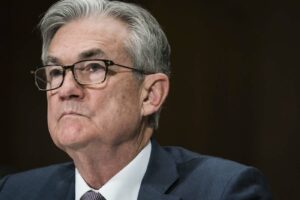